Regarding the origins of Cogoleto, we can say that this place exsisted since 1023. In fact in that year the couple Lamberto q. Godone and Oza q. Marino decided to make a donation to the monastery of San Siro. In the parchment, the text of which is accurately reported in the confirmation dated December 8, 1039, the name Cogoleto is so indicated: Codoledo and it has been evidenced, for the first time, as a consequence of Professor A. M. Salone’s researches that allowed the publication of the work entitled “Cogoleto nove secoli di storia”.

Parchment of the year 1039 the oldest document in which Cogoleto apperars. 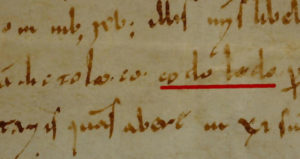 The second news supported by archival documents, dated more than one century later. It is located in a code kept at the Vatican Apostolic Library. Pope Adrian IV on November 12, 1156, confirming to the canons of Acqui certain rights of their church, counted among them the oil census of Cogoleto (censum olei de Codoledo).

Documents owned by Archivio di Stato di Genova. The authorisation for publication in this site has been issued on 17 March, 2015 – Authorisation number 10/15 – Prot. n° 1248. REPRODUCTION IS FORBIDDEN

In Cogoleto you can admire an important finding of the Byzantine era. 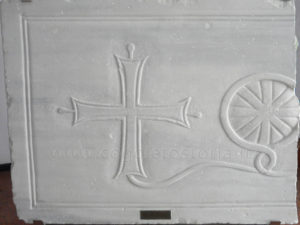 It is a marble pluteus with chrismon and cross dating back to a period between the end of the sixth century and the beginning of the seventh century. It had been used as an altar pallium in the Chapel of St. Mary Magdalene (now lost) formely located near the mouth of the stream Arestra. The pluteus was found in the nineteenth century in the ruins of that Chapel and then it had been transported to the churh of San Sebastiano. It is assumed that the pluteus had been delivered to Cogoleto by sea. The important finding is now visible inside Palazzo Rati (the Town Hall). 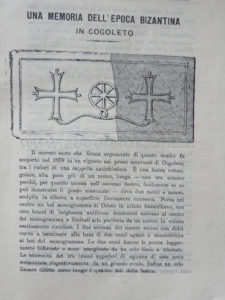